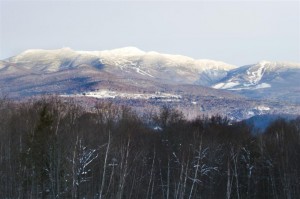 In the November issue of Men's Journal featuring the five best ski resorts in North America, Stowe, VT ranked number 2.  The combination of over 2,000 feet of vertical, history dating back to 1933 and a true New England village Stowe offers something for everyone.  The recent renovations and upgrades in the infrastructure and luxury at Stowe Mt. Resort have created a skiing experience that rivals many high-end resorts in the Rockies.

One of Stowe's most famous skiers Tiger Shaw was recently named CEO of the U.S. Ski and Snowboard Association, which governs Olympic freeskiing and snowboarding in the U.S.  This adds to the long history of ski industry pioneers who have come from Stowe or chose to call it home.

Check out the Article below from Men's Journal: 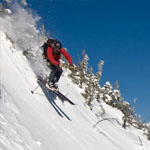 Like all ski resorts in the Northeast, Stowe is a hostage to geography. But unlike any of the others, Stowe is a big mountain in miniature - 3,719 feet, with 2,160 feet of vertical, to be exact. It's a steep, rugged crag of Appalachian relief with groomers as wide as interstates, some of the scariest bump runs in America, and glades and gullies that reward an adventurous spirit. "Stowe offers some of the steepest terrain in the country and is one of the few places on the East Coast where you can get the feel of big-mountain skiing," says Chip Knight, a three-time U.S. Olympic team skier who has skied Stowe his entire life. "Hike up to the Chin or duck into the trees off Nosedive or Chin-Clip after a big snowstorm and you'll even find some exceptional sidecountry skiing."

Terrain aside, Stowe is also the rare resort with the one quality that separates a good ski town from a great one, no matter what part of the country you're in: history. There's a difference between a ski area that exists because it has good mountains and one that was a town before, with a farming or mining industry. It's the difference between Vail and Aspen, Whistler and Revelstoke, or between pretty much any other resort in the East and Stowe.

Whittled out of the Green Mountains and drizzled in maple-syrupy charm, Stowe was a mill town, then a farm village, and then a kind of refuge for European immigrants who wanted a place to log and trap and mine that reminded them of home. It didn't hurt, of course, that the state's highest peak, Mount Mansfield, was there, on whose inclines these same immigrants began to climb up and slide down on trails cut by the Civilian Conservation Corps way back in 1933. Seven years later, the longest, highest chairlift in America was installed, broke down the first day, and then went on to run for nearly 50 years.

The modern world has long since arrived at Stowe in the few ways that really matter - a high-speed gondola, numerous high-speed quads, and the slope-side Stowe Mountain Lodge, a six-story, 312-room timber-and-stone temple to luxury that is one of the finest ski hotels in America. But to visit the town itself, you'd hardly know it. The main street (called, what else, Main Street) has steeples and taverns and actual candles burning in windows. The Matterhorn, everyone's favorite après bar since the days when celebrities and Kennedys skied Stowe, is reachable on skis and looks pretty much the way it did when it opened, in 1950. When McDonald's somehow managed to circumvent the town's ferocious zoning laws, residents were so angered that they ignored it out of business.

"What attracted me is that it feels authentic," says Scott Coggins, a 39-year-old who relocated to the village from New York City in 2010. "So many ski towns have activity on weekends, but they're not real towns. People actually live here." Once or twice a week in season, Coggins gets up, drives 20 minutes to the mountain, and is on the first lift at 8 am so he can get a couple of runs in before work. If it happens to have snowed the night before (not unlikely, since Stowe averages more than 300 inches a year, the most of any Vermont resort), he'll go even earlier, hike up, and lay some of the first tracks in Goat Woods, one of the many glades on a mountain known for its trees and gullies. He definitely won't be alone. "On real powder days, you can see people coming off the mountain with headlamps on."