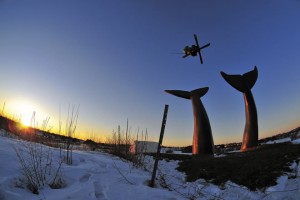 When you think of ski movies these days you think of remote locations in Alaska that are only serviced by helicopters, but think again.  Local film makers, Geoff McDonald and Chris James of Meathead Films have created  ski movies which features ski east of the Mississippi.  This year's film "Prime Cut" has skiing in the streets of Boston, at Killington as well as other Eastern location.  To read more about the creation of Meathead Films and their movies click below.