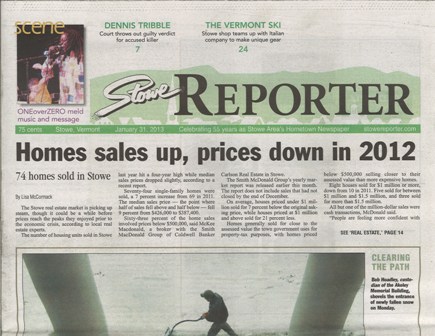 This week's Stowe Reporter featured an article by Lisa McCormack about the real estate market in Stowe.  The article also featured Broker McKee Macdonald and his views on the past year in real estate as well as what we expect to see in 2013.  Also used in the article were statistics from the 2012 Year-End Smith Macdonald Report.

The Stowe real estate market is picking up steam, though it could be a while before prices reach the peaks they enjoyed prior to the economic crisis, according to local real estate experts.

The number of housing units sold in Stowe last year hit a four-year high while median sales prices dropped slightly, according to a recent report.

The Smith McDonald Group's yearly market report was released earlier this month. The report does not include sales that had not closed by the end of December.

Homes generally sold for close to the assessed value the town government uses for property-tax purposes, with homes priced below $500,000 selling closer to their assessed value than more expensive homes.

All but one of the million-dollar sales were cash transactions, McDonald said.

"People are feeling more confident with the economy," McDonald said. "We're seeing people who have decided that they're not going to put their personal plans on hold waiting to see what happens with the government or the tax codes. There's a nice storm of people with money and the ability to get loans at low rate."

While second homebuyers tend to gravitate toward Mountain Road neighborhoods, in 2012, residential sales were spread evenly throughout Stowe, he said.

The number of Stowe houses for sale shrank 20 percent from 2011.

Based on the law of supply and demand, that should eventually help to move prices upward, McDonald said.

Excluding Stowe, sales of residential housing units in the rest of Lamoille County rose 8 percent, with 118 units sold compared to 109 in 2011.

While the market is moving in a positive direction, the inventory of homes has increased by 22 percent, from 208 to 253, which may counteract the momentum, according to McDonald.

Land and condo sales up

After several years of stagnant growth, sales of Stowe land parcels increased by 317 percent. There were 19 sales of open land, compared to six sales in 2011. Median prices rose by 24 percent, driven by sales over $500,000.

Meanwhile, inventory decreased by 9 percent; 75 land parcels remain on the market compared to 82 a year ago.

Most condos sold for less than their town-assessed value with units between $200,000 and $400,000 taking the biggest hit; on average they sold for 9 percent below their assessed value.

Improvements made at Stowe Mountain Resort have helped to generate interest the housing market, Spera said.

"Our pedigree has been enhanced by what they've done up there," Spera said. "Businesses in the entire county are looking at ways to improve their quality of service as a result of the economic challenges from the past few years. You're not going to survive if you don't get it."

Despite the upswing in sales last year, it's still a buyer's market. Making sure that a home is in good condition and pricing it right are essential, given the relatively large number of houses from which buyers can choose, Spera said.

McDonald is seeing a healthy mix of both primary and second-home buyers.

"They've been renting and now they have enough saved for down payment and are looking at the opportunity to buy into the Stowe market," McDonald said.

While the $500,000 and above market tends to attract second-homebuyers, they're looking for good deals.

"It's a turn in the right direction but not a turn to the height of the market where prices were exploding," McDonald said.

McDonald expects to see an increase in second-home sales in 2013 as the stock market strengthens and investors look for real estate deals.

"People see the value here," McDonald said. "They see the cultural aspects that Stowe provides. We expect that sales volume will continue to grow and the stabilization of the market will continue.

"We fully expect the sub $500,00 price point to be the driver, but I wouldn't be surprised to see high-end cash purchases to come back and luxury homes to command a larger portion of the market."

Home prices will likely be lower than during the real-estate peak of 2005, but higher than when the market tanked in 2008, predicts Spera.

"I don't see that we'll have a jump up in pricing this year," Spera said. "We'll have a gradual solidifying of prices, which will build confidence in market."

He also expects more people to put their homes on the market.

"Many people have been holding off on selling and they might sell now that market is recovering," Spera said. "This spring you'll see quite a few new properties coming on the market."

Buyers will also continue to consider a home's tax bill when making a purchase, and they'll put an emphasis on whether a home has cell-phone signal and wireless Internet access, Spera said.