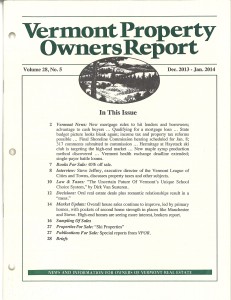 For the Market Update in this issue they looked at the state as a whole with sales still improving state-wide, but Stowe and Manchester showing much improved numbers this year.  Here's an excerpt featuring Smith Macdonald Group's McKee Macdonald: "In Stowe, single-family home sales through October were up 21% from a year earlier, according to broker McKee Macdonald of Coldwell Banker Carlson Real Estate.  We have definitely seen prices tighten on the lower end, and that will creep up into the higher price ranges, he said.  He also reported an increase in the people looking in the $1 million to $1.5 million range."

As we move toward the end of 2013, the numbers for sales in Stowe remain strong.  Look for our year-end report due out in early 2014.