Welcome to the Smith Macdonald Report, our examination of the 1st six months of the Stowe residential and land real estate market.  This report uses market-wide data based on transactions that closed in the first six months of 2014 and compares them to closings that took place during the first six months of 2013 and to Q1 2014.  Closings usually occur four-to-eight weeks after a contract is signed for that reason, the sales activity charted here reflects transactions that closed during and through the end of the 2nd Quarter, and does not include contracts signed that have not closed.

Summer is in full swing in the Stowe area with green stretching as far as one can see.  We are quickly reminded of how wonderful summer can be in Vermont after the long winter season.  Here at Coldwell Banker Carlson Real Estate we've welcomed the changing of the seasons with a change of our own, we've moved the office location to the Center Stowe Village.  Our new location keeps us on Main Street, but also allows for us to invest in the Stowe community.

The 1st six months of 2014 continue to be very strong with growth in all areas of the market compared to the 1st six months of 2013.  Year to date the number of home sales is up 21%, this equals 11 more homes sold during this time period than the height of the market in 2006.  While at the same time inventory and months of supply continue to decrease, 11% and 22% respectively.  The lower inventory, buyer demand and strong financial markets have resulted in sales spreading out over the majority of price points, including an increase of 9% in sales between $1 million and $1.5 million.  The median and average residential sales prices increased 35% and 4%, respectively, with the median seeing a larger increase due to more higher-end homes trading. 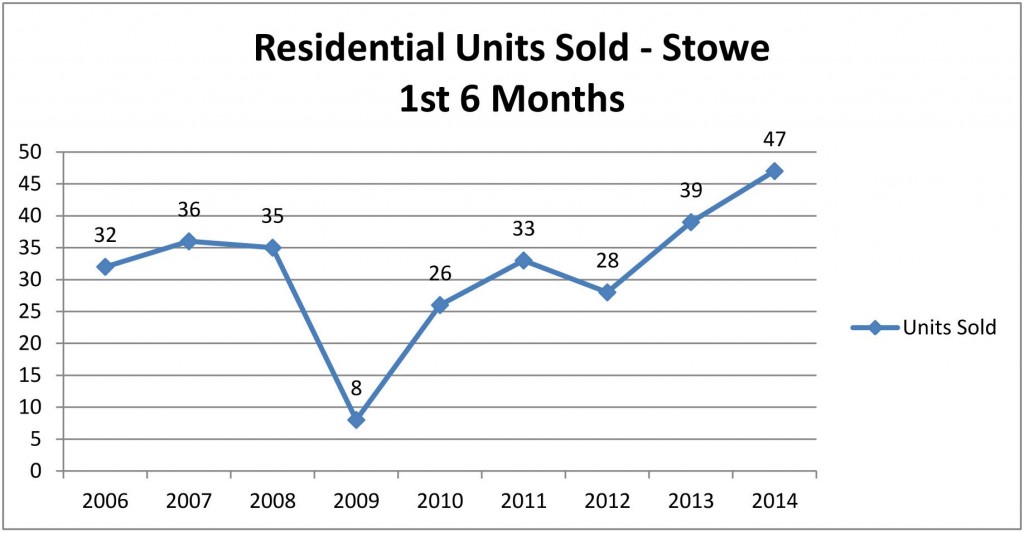 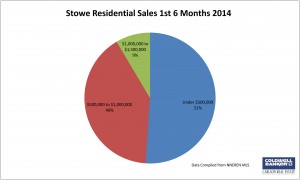 In the same categories, the chart below shows the relationship of sales price to list price. 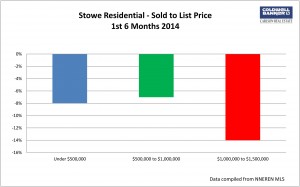 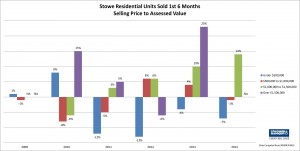 Condominium sales show significant strength as well - up 67% in the 1st six months.   The amount of inventory of this category decreased slightly as well, down 6%, but more importantly the months' of supply dropped by 43%, leaving a 23 months' supply compared to this time a year ago.  There were however decreases in the median and average sales prices, 21% and 29% respectively, mainly because no condos over $600K were sold. 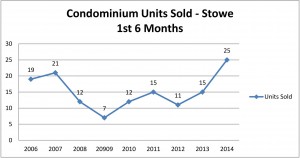 In regards to how condos are selling in relation to town assessment you will see below on the sub $200K market there was a major correction between the 1st six months of 2014 compared to the 1st six months of 2013. In the $200K to $400K there was a 6% swing year over year, as a result of six more units being sold at lower prices. Above $400K there were only minor adjustments. 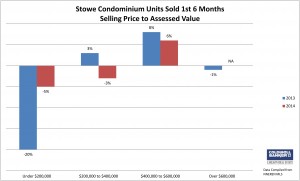 Land in Stowe has finally seen an increase in sales with 10 parcels sold over the 1st six months of 2014 compared to 6 in same time in 2013, resulting in a 67% increase. More importantly the inventory is still decreasing down 29% and the months' of supply is down 57% to 35 months. The median pricing dropped 17%, while the average rose 47% as a result of one land sale well above $500K. 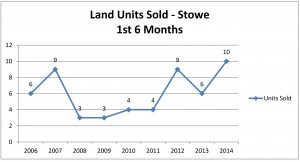