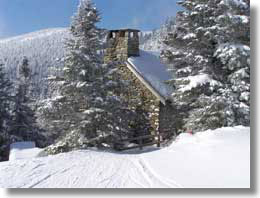 Almost a year ago, Stowe’s legendary Stone Hut burned to the ground.  With a lot of hard work, and community and state funding, the iconic one-room cabin will be available for occupancy again, on December 1.    On Tuesday, November 1, Governor Peter Shumlin, and Vermont State Parks Commissioner Michael Snyder rode a snowcat to the top of Mt. Mansfield to celebrate the rebuilding of  the Stone Hut.  The lottery system will be in place again, for those who want to stay there, and get 1st tracks at sunrise.

The hut, originally built by the Civilian Conservation Corps in 1936, burned last December 23rd, after a fire started when a wet log was left leaning against the wood stove.  The estimated cost to rebuild is around $276,000.

It's been rebuilt pretty much as it was, with an attempt to keep the original character and the coveted experience. There's no electricity or running water, and you'll need to bring your own mattress pad this year.

See you on the slopes!